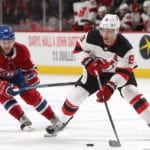 Elliotte Friedman of Sportsnet: It would be a big surprise if the Calgary Flames traded forward Johnny Gaudreau. The Flames don’t want to make any rash moves.

The Flames are looking to shake things up but have salary cap issues. They would be selling low on forward Mark Jankowski. Michael Frolik has been available for a while now. Don’t get the sense that Flames coach Bill Peters is in jeopardy of getting fired.

Toronto Maple Leafs Tyson Barrie admits he’s at a low point and that the pressure of being a pending unrestricted free agent is getting to him. There is trade interest in him.

Buffalo Sabres Zach Bogosian is close to returning and will create an even more logjam on their blue line and on the cap. They would like to add a top-six forward.

The Kings may not have been thrilled with Mario Kempe wanting to leave the organization but they were at 49 contact before – a little more flexibility now.

Does Montreal Canadiens GM Marc Bergevin think they are in a position to make a run this season and look to make a big move?

Could the Canadiens look at Devils Taylor Hall?

Eric Engels: (on Friedman’s note about the Canadiens possibly swinging for the fences on a trade this season) Speculation will likely increase towards possibly taking a run at New Jersey Devils pending UFA forward Taylor Hall.

Do not have any intel, but the Canadiens do have a strong prospect pool and 12 draft picks in the upcoming draft.

Eric Engels: The 2020 draft is in Montreal this year so GM Marc Bergevin may be inclined to move their 2021 first-round pick.

It is quiet on this front at the moment. Speculation will be there with Jonathan Drouin out long-term.