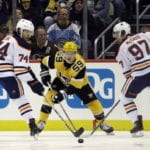 Oilers still searching for No. 3 center

The scouting notes on Andersson have him as a bottom-six NHL forward that doesn’t have a lot of pace to his game.

Jim Matheson: Oilers GM Ken Holland continues to look for a No. 3 center that has some offense to his game.

The Oilers may be wondering what it would take to acquire Ottawa Senators pending UFA Jean-Gabriel Pageau.

Jim Matheson: Edmonton Oilers defenseman Ethan Bear will be looking for a new deal this offseason. The right-handed defenseman is a restricted free agent with no arbitration rights.

They’ll probably look at a two-year bridge contract for Bear. Comparables could be between Neal Pionk‘s ($3 million per with the Winnipeg Jets) and Ryan Pulock‘s ($2 million with the New York Islanders).

Johnson could be staying with the Penguins

Dan Kingerski of Pittsburgh Hockey Now: Pittsburgh Penguins defenseman Jack Johnson‘s play of late has been improved. His confidence is up and he’s been a valuable asset to the Penguins and to defensemen Juuso Riikola and John Marino.

Any trade speculation surrounding Johnson “is probably null and void.”

Kovalchuk has control of where he ends up

Chris Johnston of Sportsnet: There has been lots of speculation regarding Los Angeles Kings forward Ilya Kovalchuk. Kovalchuk has a no-movement clause so he’s not going anywhere that he doesn’t want to be.

The Kings met with Kovalchuk’s camp and they haven’t reached any resolutions yet. He’s been a healthy scratch and will let the situation play out.

He carries a $4.25 million salary and cap hit next season.