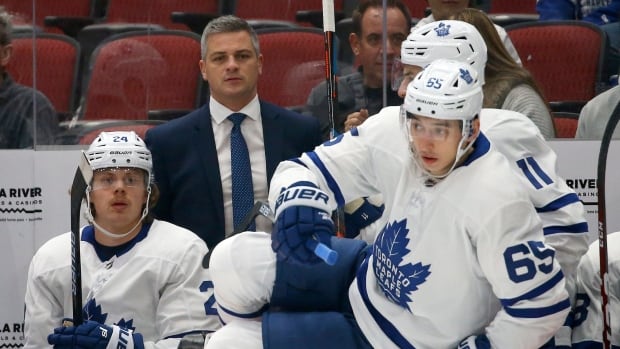 It was the first game as an NHL coach for Keefe, who was promoted from the American Hockey League’s Toronto Marlies Wednesday after Mike Babcock was fired.

Toronto goaltender Frederik Andersen handled some difficult chances in making 30 saves and did not allow a goal until Vinnie Hinostroza scored his third of the season at19:43 of the third period. Ilya Mikheyev added two assists for Toronto.

Darcy Kuemper stopped 30 shots for the Coyotes, who had won their two previous games by shutout.

The Maple Leafs scored the first goal for the first time in nine games at 19:14 of the first period when defenseman Barrie took Mikheyev’s pass, skated in from the point to the right circle and fired a wrist shot for his first goal this season.

Jake Muzzin also picked up an assist on the goal that followed a scramble around the Coyotes net and gave the Maple Leafs their first lead in a game in 446 minutes.

The Coyotes, who had won by shutouts in their two previous games, had not allowed a goal in 144 minutes.

A key play for Toronto was Andersen’s superb save on Carl Soderberg early in the first period.

William Nylander picked up the first penalty of the game for high sticking at 15:36 of the second period.

Andersen made a good save on Derek Stepan in the first few seconds of the power play.

John Tavares, Morgan Rielly and Auston Matthews spoke with the media about the hiring of Sheldon Keefe as new head coach of the Toronto Maple Leafs. 1:49

But the Maple Leafs scored against the power play at 16:49. Engvall scored his first NHL goal in his second game with Toronto, picking up a loose puck in the neutral zone and outskating two defenders to score on a wrist shot.

Matthews scored his 15th goal of the season — his second on the road — on a rebound 48 seconds into the third period.

The Maple Leafs killed off two penalties in the third period.