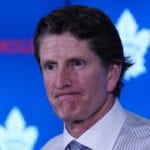 What will the Maple Leafs do with coach Babcock?

Chris Johnston: Coach Mike Babcock when asked about his job security with the Toronto Maple Leafs: “I’m going to do it as hard as I can for as long as I can. I’ve always bet on Mike Babcock, I’ll continue to bet on him.”

James (@Account4hockey): Chris Johnston on Sportsnet 650 that ownership and management had the idea going into the start of the season that coach Mike Babcock would get one more season to see if he could get them over the hump. Johnston thinks they still want to give a little more time to see if they can get turned around.

James (@Account4hockey): Johnston adds that they really want to give him the full year, but with the way they’ve been playing they might have to make a decision sooner if they don’t improve.

They are all feeling the heat and know that changes are going to have to be made if they can’t get corrected.

James (Account4hockey): Bob McKenzie on TSN 690 on Mike Babcock: “I don’t believe that the Toronto Maple Leafs are eager to fire Babcock”.

McKenzie adds that it’s not their first option to fire Babcock. Their next three games are really important.

James Mirtle of The Athletic: The Leafs have only one regulation win in their past nine games, two in their past 15. They have given up the first goal 17 times already.

Their special teams have been bad, but how much of that lies with their assistant coaches?

Get the sense that not many Leafs players love playing for Babcock, which shouldn’t be anything really new. Has Babcock lost the room?

Firing Babcock is the “simpler and cleaner” move when compared to trying to improve their roster with a dollar-in, dollar-out trade.

The Maple Leafs Sheldon Keefe coaching in the AHL.

Any decision isn’t as black and white as some may make it out to be, but at some point, something needs to give with this team.