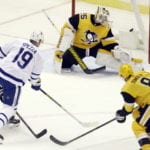 On Babcock and their biggest area of need

ESPN: Greg Wyshynski, Emily Kaplan, Dimitri Filipovic, and Rick DiPietro on what is wrong with the Toronto Maple Leafs and what to do to fix them.

If Mike Babcock has lost the room and is not going to utilize the roster the way it should be, it may be time to move on. DiPietro notes that their cap issues may it hard to make an impactful trade, so firing Babcock may be on the only way to shake things up.

Kaplan suggests buying low on DeSmith or swinging for Jarry. Bracco and a draft pick for Jarry?

Both Filipovic and DiPietro believe the Maple Leafs need to add a backup goalie as well.

ESPN: Buffalo Sabres GM Jason Botterill said yesterday at the GM meetings that he is “actively looking” for help at forward.

The Sabres are dealing with some injuries up front – Kyle Okposo, Tage Thompson, Johan Larsson, Marcus Johansson, and Vladimir Sobotka – and are lacking depth.

They are lacking secondary scoring.