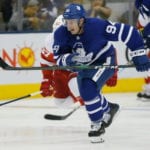 Barrie could be flipped by the Maple Leafs at some point

James (@Account4hockey): Chris Johnston on Sportsnet 650 on Toronto Maple Leafs defenseman Tyson Barrie not fitting in: “I think they might flip him at some point but I don’t think they’re there yet.”

Barrie has also come out and said that this being a contract years has affected him.

James Mirtle of The Athletic: Elliotte Friedman said on Saturday that Barrie hasn’t asked for a trade.

From what has been hearing the past few weeks is that a move may happen at some point. Barrie isn’t happy in Toronto and his agents have spoken recently with the Maple Leafs front office about it.

The right-handed, pending UFA defenseman, had been hoping for a big long-term deal at over $45 million, and that has been put in jeopardy this season. Remaining in Toronto and not getting the same usage as he did in Colorado could cost him many millions on his next deal.

One issue for the Maple Leafs is that his cap hit is only $2.75 million, so it doesn’t create a lot of space to replace him in their top four. More pieces may have to be included in any deal, which then complicates things even more.

Teams calling the Wild to see who is available

The Fourth Period: The Minnesota Wild sit dead last in the NHL and trade talk is picking up around the team.

It’s believed that teams are checking in on forwards Jason Zucker, Ryan Donato and Kevin Fiala, and defenseman Jonas Brodin.

It’s not known if GM Bill Guerin would consider trading any of those four.

Zucker has been in the rumor mill for the past two years. He carries a 10-team no-trade clause.

The Wild have limited salary cap space and would be looking to move some salary while adding draft picks and prospects.