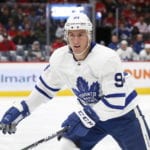 “He (Barrie) has not asked for a trade, however, I think there is an understanding that so far it hasn’t worked,” Friedman said.

Barrie is a pending unrestricted free agent. So far the Maple Leafs have rejected the idea of trading him.

“I do think there’s a recognition that this can’t continue for him,” Friedman said.

The Penguins could move a goaltender

Sportsnet: The Pittsburgh Penguins are listening to trade calls on goaltenders Tristan Jarry and Casey DeSmith.

“I do believe that they would be willing to move one of these guys (Jarry or DeSmith) if the right offer came along,” Johnston said in the Headlines portion of Hockey Night in Canada, and added that, should the Maple Leafs enter the market for a backup goalie, Jarry would make sense for the team.

“What makes Jarry so appealing at this point: he’s just 24, he’s had a great start to the season and he only counts $675,000 against the cap, which would obviously have appeal for a team like Toronto in a cap bind.”

Question is when, not if, Hall is going to get traded

“I think more likely than not he gets dealt,” NHL insider Elliotte Friedman said to Bob Stauffer on Oilers Now today. “I think the bigger question is how deep does Ray Shero go on this. But I would expect he’s going to get traded.”

It’s possible that Edmonton Oilers could look at Hall as a rental according to Staples, but you shouldn’t expect a long-term future with the team.

If the Oilers and Devils were looking at a sign and trade, it would likely cost the Oilers Evan Bouchard.