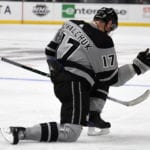 ** Update: The Hockey News: “Sources are telling @TheHockeyNews that Ilya Kovalchuk’s release from the Los Angeles Kings is being finalized. Details are being worked out.” **

Elliotte Friedman: There is some talk that the Los Angeles Kings have told forward Ilya Kovalchuk that he won’t be in their lineup for the foreseeable future. He can still practice with the team. More details will be coming.

David Pagnotta: The Kings have been trying to trade Kovalchuk again recently. Have been told that his agent is helping out trying to get a trade worked out.

Kovalchuk has a full no-movement clause.

Dennis Bernstein: LA Kings GM Rob Blake did not say if Kovalchuk has asked for a trade.

Blake said that “He’s a healthy scratch as Tyler Toffoli and Adrian Kempe were,” and that nothing more is occurring.

Dennis Bernstein: When asked if Kovalchuk could be back in the lineup on Thursday, GM Blake said that it is possible.

“Just like the rest of the players, he’ll get his opportunity to come back in,” McLellan said. “We have to treat him like any other player.”