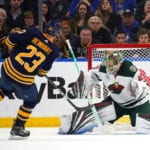 Dane Mizutani of the Pioneer Press: The Minnesota Wild have a 6-10-1 record heading into tonight’s game. Despite their record, GM Bill Guerin likes what he’s recently seen from the team and may not be ready to throw in the towel on the season just yet.

“If there’s an opportunity for me to make the team better, I’ll do it,” Guerin said. “That hasn’t presented itself. I still want to give this group an opportunity. They deserve it.”

Guerin when asked if there could be a point later where the ‘window closes.’

“Yeah. But we’re not there yet. I have my checkpoints. Where are we at certain dates? What are we doing? Who’s doing what? Those are things that I address at those times.”

The Wild lack a game-breaker, star power, which are basically impossible to trade for. You usually get those types of players through the draft.

Head coach Bruce Boudreau doesn’t have a contract for next season, but Guerin didn’t want to comment on that.

The Sabres have work to do on and off the ice

Mike Harrington of the Buffalo News: The Buffalo Sabres have struggled of late and they still have a need to add a top-six forward.

The Sabres play 10 games in the final 17 days of November. GM Jason Botterill may be hesitant to trade a defenseman and become a little thin on the blue line over that stretch. He may not have a choice though as they may not be able to afford to wait until the trade deadline.

The Sabres won’t be back practicing until tomorrow after their return from playing in Sweden.

They have plenty of work to do on and off the ice.