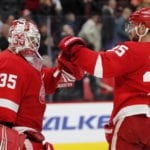 It didn’t take long for the Detroit Red Wings’ promising start to this season to derail. After winning three of their first four games, the Wings managed just three more victories over their next 15 contests.

As of Nov. 10, the Wings were struggling at both ends of the rink. They’re dead-last in goals-for per game (2.21), possess the worst penalty-killing percentage (68.3), and the second-worst goals-against per game (3.79).

It’s a far cry from the optimism that abounded following the club’s hire of their former Hall-of-Fame captain Steve Yzerman last April. Their recent slump drew comparisons to a pair of similar poor starts during the Wings’ grim years of the early-to-mid 1980s.

Yzerman hasn’t wasted time getting busy in this season’s trade market. On Oct. 28, he acquired winger Brendan Perlini from the Chicago Blackhawks. Last week, he swung a deal with the St. Louis Blues for winger Robby Fabbri.

Both players are affordable depth acquisitions. Fabbri had a promising debut with two goals in a 4-2 upset over the Boston Bruins. Perlini, however, has yet to crack the score sheet after six games with the Wings.

With his club foundering in the standings, there’s speculation Yzerman could have more changes in store.

MLive.com’s Ansar Khan believes Yzerman could continue to seek value in low-risk deals. He also wondered, however, if the Wings GM might make a bigger move to provide immediate help to his lineup while providing fans with some hope for the future.

Such a move could prove costly. Given the Wings’ current woes, rival general managers could try to pry away a good young forward like Dylan Larkin, Anthony Mantha, or Tyler Bertuzzi. Yzerman won’t bite, of course, but that’s likely what the asking price would be to bring in an impact player.

Khan believes Yzerman’s game plan will be trying to ship out some veteran contracts near the Feb. 24 trade deadline in exchange for draft picks. Rental players such as goaltender Jimmy Howard and defenseman Mike Green and Trevor Daley won’t have much value. Khan also feels those signed beyond this season, such as Valtteri Filppula, Frans Nielsen, and Justin Abdelkader, will be almost impossible to move.

Andreas Athanasiou could be an attractive trade chip. Cap Friendly indicates he’s in the second year of a two-year, $6-million contract. The 25-year-old forward will be a restricted free agent with arbitration rights next summer. A 30-goal scorer last season, Athanasiou could draw interest from clubs seeking additional scoring punch.

The roster might not be the only place where Yzerman shakes things up. The Detroit News‘ Ted Kulfan noted growing conjecture over Jeff Blashill’s future as the Wings’ head coach.  Looking at Yzerman’s tenure as Tampa Bay Lightning GM, Kulfan felt he doesn’t tend to make rash or hasty decisions.

Khan believes Yzerman will stick with Blashill for the remainder of the season unless the team falls completely apart. Considering how poorly things are going, that decision could come sooner than expected.

Few observers considered the rebuilding Wings a playoff contender this season but it was hoped they would show some improvement. Yzerman could take the rest of this season to evaluate his roster before making substantial moves. With what he’s seen thus far, there’s still plenty of work to be done.