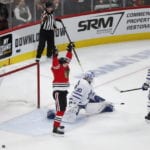 TSN: Jesse Puljujarvi told Sami Hoffren of Iltasanomat that he plans on remaining with Oulun Karpat for the remainder of the season.

Puljujarvi had an opt-out clause until December 1st to return to the NHL, the deadline date that he would have needed to sign an NHL contract to be eligible to play this season.

“The 100 per cent focus is on playing in Oulu until the end of the season and being able to play a great season there,” Puljujarvi said, via a translation.

He remains the property of the Edmonton Oilers and is a restricted free agent.

Other teams had shown interest in Puljujarvi, but the Oilers didn’t receive any offers they liked enough. GM Ken Holland had previously said that he’s prepared to wait if there wasn’t an offer he liked.

A backup option for the Maple Leafs?

Terry Koshan of the Toronto Sun: Toronto Maple Leafs backup goaltender Michael Hutchinson now has a 0-4-1 record with a .879 save percentage.

It might be time for the Maple Leafs to consider recalling goalie Kasimir Kaskisuo to give him a shot. Contract wise it is basically a wash between Kaskisuo and Hutchinson.

Babcock’s job could be tied to goaltending

The Leafs need to be careful with the amount of regular-season games Anderson played to be adequately rested for the playoffs, but they need to qualify for the playoffs first.

If the Maple Leafs don’t make the playoffs, Babcock would be fired. They need some wins out of their backup, who is GM Kyle Dubas’ choice and not Babcock’s. Dubas didn’t sign a backup this offseason, and he traded Garret Sparks.