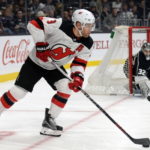 Mike Morreale of NHL.com: Taylor Hall said that his agent Darren Ferris will meet with New Jersey Devils GM Ray Shero this week while they are out West. Ferris and Shero haven’t had a face-to-face meeting since training camp.

“I know they’re supposed to meet, but I’m not sure when it will exactly happen,” Hall said Monday. “I think I’ll definitely talk to Darren beforehand and just chat about how things are going. But at this point in time, there’s not much that Darren and I haven’t really talked about. We both know what the situation is and we’re just kind of waiting to see what transpires over the next couple weeks, month or couple months.”

Ferris did say that he and Shero have been in contact throughout the start of the season.

TSN: Darren Dreger when asked if there has been any progress between the Devils and Taylor Hall’s camp.

Dreger says there hasn’t really been any progress but they have had constant dialogue. Shero and Ferris will meet on Thursday in Calgary.

“To this point they haven’t discussed the parameters – term and money – of what a deal might look like to keep Hall out of unrestricted free agency. I’m sure that Ferris would prefer Hall wait until the end of the year, go through the courting process and then see what the field might look like on July 1. But at the end of the day, that decision will be made by Hall.”

Toffoli likely not in the Kings long-term plans

“He’s only 27-years-old and you wonder, where he fits into this Kings rebuild? And it is a rebuild; the Kings are going to turn this roster over big time over the next couple of years. At this time, and it could change, I don’t believe the Kings are thinking they’re going to re-sign Toffoli. I do believe he’ll be made available for a trade closer to the February 24 Trade Deadline.”