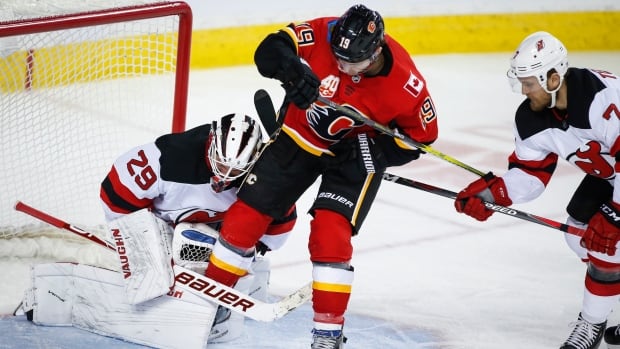 Noah Hanifin had a goal and two assists on Thursday, and the Calgary Flames scored four times in the second period en route to a 5-2 victory over the New Jersey Devils.

It’s Hanifin’s first three-point game as a Flame and the fourth of his career.

The Flames won their second straight to open a four-game homestand and improved to 6-1-1 on the season at the Scotiabank Saddledome.

Jack Hughes had a goal and an assist to lead the offence for New Jersey (4-6-4). Nikita Gusev also scored while Taylor Hall had an assist to extend his points streak to seven (1-8-9).

The Devils fell to 2-1-0 on a five-game road trip, which continues Friday night in Edmonton.

Rittich made 21 stops to earn the win. Mackenzie Blackwood, peppered with 38 shots, suffered the loss.

Hanifin’s points came on three consecutive goals after Gusev had given the Devils a 2-1 lead at 5:21 of the second.

On the tying goal, Hanifin showed patience and poise in carrying the puck from the blue line along the sideboards, then around the back of the net, before centring a perfect pass to Monahan, who one-timed his fourth of the season. It was just the second goal in 17 games for the perennial 30-goal scorer.

The go-ahead goal from Backlund at 14:53 on the power play was a fluke. His centring pass was accidentally deflected into his own net by Devils captain Andy Greene.

The Flames power play struck again with 14 seconds left in the second period. Hanifin’s shot from the blue-line beat Blackwood, who was screened by Milan Lucic.

Gaudreau put the game away in the third, getting behind Matt Tennyson and scoring on a nice backhand.

Hanifin’s big night came in the first game after coach Bill Peters, frustrated with his team’s inconsistent play all season, shuffled all three of his D pairings. Hanifin’s only partner since he was acquired by the Flames two seasons ago, Travis Hamonic, moved to the top pairing, alongside reigning Norris trophy winner Mark Giordano. Hanifin’s new partner, promoted from the third pairing, was Rasmus Andersson.