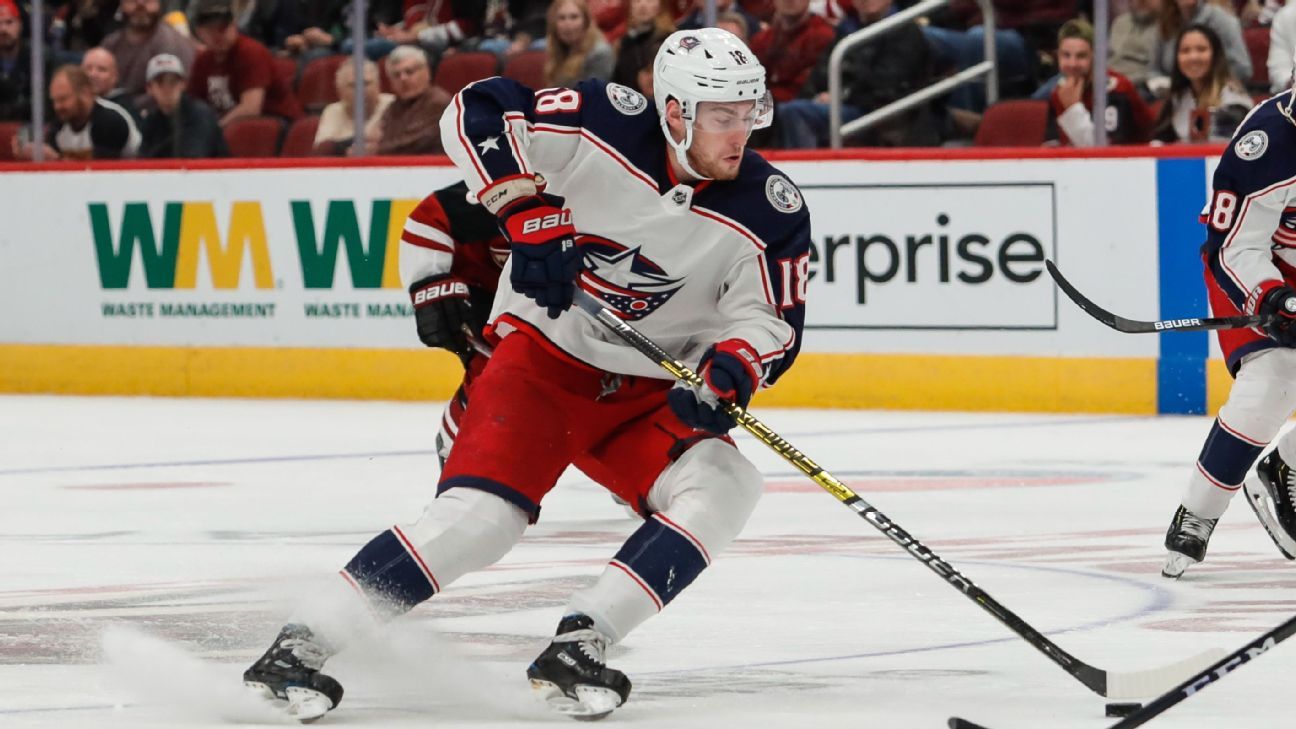 A slight dip down to 46 games this week in the NHL, which is manifested in the lack of four-game schedules to take advantage of in your league. The Arizona Coyotes, Ottawa Senators and Washington Capitals get an extra game, but that’s it.

On the plus side, only four teams are reduced to two games on the schedule. The Columbus Blue Jackets, Nashville Predators, New York Islanders and, for the second week in a row, the Tampa Bay Lightning play only twice.

The Blue Jackets are the only team in the NHL without a matchup next Saturday, Nov. 16 (hurry up, Seattle). As the lone squad without a dance partner, and a reduced schedule for the week, it’s worth taking a deeper dive as to how the team is faring without Artemi Panarin, Sergei Bobrovsky and Matt Duchene.

So, from a fantasy perspective, it’s safe to say it’s not going great since the mass free-agent exodus that occurred this offseason.

Despite an increase in average ice time and expected progression from a 21-year-old in his third season, Dubois is on pace for fewer points than last season.

While he has the chops to be a top fantasy center in the NHL, Dubois is not going to get there without a profile on the power play. Last season, an additional five even-strength points for Dubois would have put him ahead of Steven Stamkos, Jack Eichel, Blake Wheeler, Mikko Rantanen, Tyler Seguin, Sebastian Aho and Auston Matthews in that category. But Dubois had only nine power-play points all season. So while these other top fantasy forwards were putting up 80, 90 or even close to 100 points, Dubois was stuck at 61.

Catch more than 180 NHL games streaming live this season on ESPN+. Click here for the upcoming schedule and to learn how to subscribe.

Dubois is on pace to almost double his power-play output this season, but the rest of his stat profile is suffering. His line with Atkinson and Gustav Nyqvist has accounted for all of four goals at even strength while playing together this season. That’s not top-line material. Sonny Milano, Boone Jenner and Josh Anderson have provided more at 5-on-5 for the Blue Jackets.

Dubois, Atkinson and Nyquist have been split up for the Jackets last three games.

Atkinson is trying his best to replicate his 41-goal campaign from last season, but it’s not going to happen. He’s on pace for 15 tallies this season despite increasing the number of shots on goal he’s taking (he’s sixth in the NHL with 62, on pace for more than 300). He was the one given the boot from the top line by coach John Tortorella.

Nyquist, through no fault of his own, is no Artemi Panarin. It sure looks like Dubois and Atkinson have missed their “Bread Man.” It’s understandable, as the trio played almost 750 minutes at even strength last season and accounted for 50 goals at 5-on-5. If we prorate the 90 minutes Atkinson, Dubois and Nyqvist have played together this season, they’d get to 33 goals together in 750 minutes. That’s OK, but it’s not a top-flight line like the Blue Jackets had last season.

Missed an episode of the ESPN On Ice podcast with Greg Wyshynski and Emily Kaplan? Find all the episodes from the show’s catalogue here. Listen »

Meanwhile, Zack Werenski and Seth Jones are suffering through a reduced amount of offense generated in front of them. Last year on Nov. 8, these two had a combined 15 assists despite Jones missing most of October. This year, with both healthy, they have 10 helpers combined. Fewer goals, means less points for the blue line. Add in the plus/minus concerns, and it’s almost not worth it for fantasy.

Really, if you play in a league with plus/minus as a category – and especially if its one of only five or so offensive categories – you can’t be invested in the Blue Jackets. Just the players we’ve talked about so far – Dubois, Atkinson, Nyqusit, Jones and Werenski – are a combined minus-28 already this season.

Which brings us to the crease. Newcomer Elvis Merzlikins isn’t the answer and Joonas Korpisalo isn’t faring any better with the expanded workload. This is pretty much exactly what we expected coming into the season, but it’s still surprising that the Blue Jackets just seem to be OK with the situation. Both of their AHL goaltenders, Veini Vehvilainen and Matiss Kivlenieks, are showing well so far this season, but there’s no reason to think they’d be the difference-maker for the NHL club. (That said, file their names away in the same folder you used for Jordan Binnington last season.)

So, who should be on your fantasy teams? Jones and Dubois are still worth having locked into rosters, just hold your nose at the plus/minus. Trading for either of them does feel like a potential move to make. After all, they didn’t have too much value coming into the season as the Jackets slide could be seen coming a mile away, and that value has likely dropped since then. It wouldn’t hurt to throw a line in and see what the cost of acquisition would be.

But that’s where I’m drawing the line for fantasy. Atkinson and Werenski should both be on benches for the time being. If they can break their funk you can bring them back into your lineup. I’m not opposed to dropping them in 10-team, shallower leagues if you need to. Nyquist had his first multi-point game of the season on Thursday, but only played 12 minutes. I’m tempted to give him a little longer to see if the new line combinations pay dividends, but not much longer.

Don’t come anywhere near these goaltenders.

For those new to the forecaster chart, here are some explanations: “O” (offense), which is on the left for each game, and “D” (defense), on the right, matchup ratings are based upon a scale from 1 (poor matchup) to 10 (excellent matchup) and are calculated using a formula that evaluates the team’s season-to-date statistics, their performance in home/road games depending on where the game is to be played, as well as their opponents’ numbers in those categories. The “Ratings” column lists the cumulative rating from 1 to 10 of that week’s offensive (“O”) and defensive (“D”) matchups.

In the notes below, the focus every week will be mainly on players that are available for potential use. Ownership below 50 percent of ESPN leagues is a good generalized cutoff. I’ll try to also include players below 10 percent ownership whenever possible to cater to deeper formats.

Colorado Avalanche: Sure, why not? Let’s add Nathan MacKinnon to an injury report that also includes Mikko Rantanen and Gabriel Landeskog. MacKinnon left Thursday’s blowout with an upper-body injury (after scoring four points, of course, because he’s Nathan MacKinnon). No word on the extent of the injury, but this will be a very different Avalanche offense if he misses time, too. I’m looking at Vladislav Kamenev as an intriguing deeper league option, as he picked up a much bigger role in the third period on Thursday after MacKinnon was out. But overall, you have to downgrade the whole team if it turns out MacKinnon is also missing time. That, unfortunately, takes away some pretty good options that have come off the waiver wire in recent weeks (Joonas Donskoi, anyone?).

Washington Capitals: The only four-game schedule for a team with a top-end offense, there aren’t a lot of places to find a wedge in fantasy. That said, can we all just get on board the Jakub Vrana train? He’s showing signs that he’s ready to break through in this Capitals top six, where his role is cemented. He has five goals in his past three games and is locked in with Evgeny Kuznetsov. Would it be nice if he was on the top power play? Sure, but this Capitals team scores plenty at even strength, too. Vrana is still available in one-third of fantasy leagues.

Danton Heinen, W, Boston Bruins: Jake DeBrusk‘s injury doesn’t sound like it will be a prolonged issue, but any chance to roll with the Bruins top-ranked power play is worth noting. Heinen has had stretches of success in the past when called upon to fill a role on the man advantage with this stacked Bruins unit.

Jack Roslovic, W, Winnipeg Jets: Initial lineup projections suggest Roslovic is going to get a look in the top six while Bryan Little is out. This is worth monitoring as Roslovic has shown significant scoring chops in the AHL and while coming up with the U.S. National Team Development Program – he’s just never been given a real opportunity to display it in the NHL.

Jimmy Vesey, W, Buffalo Sabres: Keep a close eye on the Global Series games this weekend between the Sabres and Tampa Bay Lightning. Vesey returned to the Sabres lineup last weekend to find himself skating with Jack Eichel and Sam Reinhart on the top line. Apparently Victor Olofsson‘s eight-game goalless drought was too much for coach Ralph Krueger. Anyone skating with Eichel is worthy of our attention.