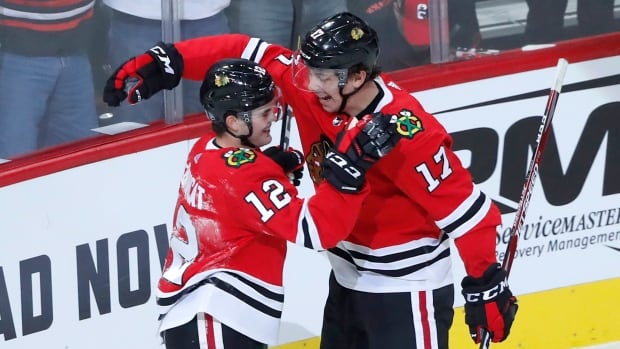 The Blackhawks returned to home ice and got back to basics against one of the NHL’s most improved teams.

Patrick Kane had a power-play goal and two assists, and Chicago beat the Vancouver Canucks 5-2 on Thursday night.

Alex DeBrincat and Andrew Shaw scored in the first period, and Dylan Strome had three assists as the Blackhawks dealt Vancouver its first regulation loss since Oct. 19 at New Jersey. David Kampf and Brandon Saad added empty-netters as Chicago struck early and effectively managed a lead following a 1-2-1 road trip.

“Big win for us, obviously, coming home from a long trip and to a difficult opponent,” coach Jeremy Colliton said. “We would like to find a way to string two, three, four, five games together.”

WATCH | Canucks slow down with loss to Blackhawks:

The Blackhawks (5-7-3) have scuffled early but were in control during most of this one. Corey Crawford, who made 36 saves, was sharp when the Canucks got close.

“We had a pretty solid game all-around,” Strome said. “When you’re playing with the lead, you’re not really chasing it. You’re comfortable.”

The Blackhawks matched their best offensive output so far this season and scored twice with the man advantage for the first time since Feb. 22, a span of 35 games.

“A few guys got on the scoreboard tonight and that’s a good thing too,” Kane said. “Now we go from here.”

J.T. Miller and Jake Virtanen scored for the Canucks, who entered on a 5-0-3 run to climb to second place in the Pacific Division. Jacob Markstrom blocked 32 shots.

This game was mostly a clunker for Canucks coach Travis Green.

“I’ve said we’ve played well most of the game this year, but tonight I don’t think we played that well,” Green said. “We didn’t look sharp. We didn’t handle the puck very well.”

“We’re getting points in pretty much every game,” Markstrom said. “It’s easy to say we haven’t had win in a while, but we haven’t lost at home in regulation. If we keep that going, it’s going to be successful.”

DeBrincat opened the scoring 6:41 in from high in the slot. After slipping free from rookie defenceman Quinn Hughes, DeBrincat fired as he tumbled and beat Markstrom on the stick side.

Vancouver defenceman Troy Stecher saved a goal when he dropped and blocked Kampf’s point-blank one-timer with about seven minutes left in the period.

Shaw made it 2-0 with 1:17 remaining in the first, just 11 seconds after Miller was sent off for hooking. Shaw one-timed Strome’s feed from behind the net to finish a quick, tight passing play.

Miller deflected in a power-play goal at 1:03 of the second, scoring with just one second left on Jonathan Toews’ slashing penalty. Miller was a parked just left of the net when Elias Pettersson’s pass across the creased caromed in off the shaft of his stick.

Kane’s goal, his fifth, with 5:06 left in the third made it 3-1. He beat Markstrom on the glove side with a screened shot from just above the left circle.

Virtanen deflected Alexander Edler’s shot from the point with 1:01 left to cut it to 4-2, but Saad scored into an empty net with six seconds remaining.