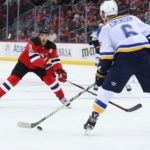 John Vogl of The Athletic: Thomas Vanek and Jason Pominville continue to skate and have committed to retirement just yet.

Pominville is skating in Buffalo.

“I’m still working out and skating as much as I can just to keep myself somewhat sharp,” Pominville said from Buffalo. “I don’t know if I’m really doing this for a reason, but I still feel like I owe it to myself in case something happens.”

Vanek is skating in Minnesota.

“Hockey is our passion,” Vanek said from Minnesota. “It’s mine and I know it’s Pommers’ too. I’m still skating and staying in shape and if the right thing – and it would absolutely have to be the right thing – would come along, then I would think about it very hard to come back and give it one more shot.”

Pominville would love to sign back with the Sabres but there isn’t salary cap space and the fit at the moment.

Vanek will stay in Minnesota for now but if a shot at the Cup presents itself, he “might have to selfish again for five more months.”

Will Devils try to get an early jump on the market with Hall? Would the Blues be interested?

Larry Brooks of the New York Post: Taylor Hall‘s comments about the New Jersey Devils fans didn’t sound like they are coming from someone who plans on staying there for the next eight-nine seasons.

Does Devils GM Ray Shero get an early jump on the trade market if the thinks they can’t re-sign him or do they wait until closer to the trade deadline?