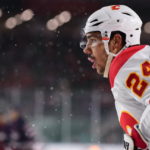 Frank Seravalli of TSN: Contract talks between the New Jersey Devils and Taylor Hall are believed to be mostly positive, but he did make the comments about the fans booing them.

The Calgary Flames have defensemen Travis Hamonic and T.J. Brodie on the last year of their deals. There was some talk that Brodie was almost dealt to the New Jersey Devils at the draft before they acquired P.K. Subban. The Flames and Hamonic held initial talks, but they may not have gained any traction.

The Toronto Maple Leafs need to move some bodies to activate Zach Hyman from the LTIR. Martin Marincin and two forwards could be on the move. They are trying to trade Nic Petan. One other forward may need to go on waivers or be moved – Nick Shore, Jason Spezza and Dmytro Timashov.

Jonathan Quick‘s salary decreases over the final three years of his deal.

Columbus Blue Jackets defenseman Ryan Murray is injured again. He’ll be out for three to four weeks with a broken hand.