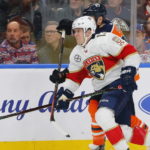 Little to no market for Ryan

Bruce Garrioch of the Ottawa Sun: The Ottawa Senators made forward Bobby Ryan a healthy scratch on the weekend. There likely isn’t much of a trade market for Ryan, if at all. He has two years left on his deal at $7.25 million per. The Senators have also been scratching Mikkel Boedker.

TSN: Since Josh Ho-Sang requested a trade and since passing through waivers at the start of the season, the Islanders told him not to report to their AHL team in Bridgeport. He’s been skating and training in Toronto since then.

Darren Dreger reported last week that the Islanders were still trying to move him.

Jonathan Willis of The Athletic: Should the Edmonton Oilers look at adding a veteran defenseman?

The Oilers played the Florida Panthers on Sunday and saw first hand pending free agent defenseman Mark Pysyk who is rumored to be available.

The 27-year old, right-handed Pysyk had been averaging 18-19 minutes a game over the past three seasons. He could slot in as their No. 5 defenseman.

Jason Gregor: Think the Oilers should be looking to add a veteran bottom-six forward that can produce before they start considering adding a veteran defenseman.

Upfront is more of an issue for the Oilers right now compared to their blue line.

Jim Matheson: Would presume that Oilers GM Ken Holland and already checked in on Vancouver Canucks forward Sven Baertschi. He is a proven scorer that could play on their third line. His salary would be an issue though.

David Staple of the Edmonton Journal: The Edmonton Oilers need bottom-six forward help and a third-pairing defenseman. They need more speed and skill at those positions.

The Oilers could continue to try to fill internally, or they could look to make a trade.

They could look to trade Jesse Puljujarvi for help on the wing. would let Puljujarvi finish his season over in Finland before deciding Puljujarvi’s fate with the organization. If they Oilers are able to land a second-line winger or third-line center for Puljujarvi, a move would be tempting.