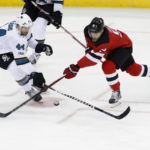 The trade rumor mill has grown quiet through most of the first month of this NHL season.  That’s due to all of this summer’s notable restricted free agents being re-signed in the weeks before the season opener.

The futures of a couple of pending unrestricted free agent stars became fodder media chatter. Most of the speculation, however, focused on fading stars or depth players.

Here’s a look at the NHL players who have become the subject of early-season trade conjecture.

The former Hart Trophy winner is slated to become an unrestricted free agent next July. While there’s been steady contact between Hall and Devils management, formal contract discussions have yet to begin. That’s raised questions over Hall’s long-term future in New Jersey, especially given the Devils’ poor start.

There’s already some suggesting the Edmonton Oilers could attempt to reacquire Hall. That’s unlikely given the high cost of doing so with Connor McDavid and Leon Draisaitl in the lineup.

Quick’s poor start has some folks wondering if the long-time Kings starting goalie might be shopped at some point.

Vlasic, 32, was linked to the Montreal Canadiens after they reportedly scouted the Sharks earlier in the month.

He’s in the second season of a seven-year contract with a full no-movement clause that he’s unlikely to waive to return to his hometown. His declining play since last season, however, could generate more speculation about his future in San Jose.

Following an injury-hampered 23-point performance in 2018-19, Turris began this season on the Predators’ fourth line. The 30-year-old center is earning $6 million annually through 2023-24.

TSN’s Bob McKenzie believes Turris’ situation is worth monitoring. It was no secret Predators GM David Poile attempted to move him this summer. He’s since moved up onto the second-line with seven points in 12 games.

The Sabres will be pressed for cap space once sidelined rearguards Brandon Montour and Zach Bogosian return to action. For the time being, however, Sabres GM Jason Botterill isn’t in any hurry to move out a blueliner.

The 21-year-old restricted free agent winger is playing in his native Finland awaiting a trade from the Edmonton Oilers.  General manager Ken Holland could seek a draft pick and a top prospect in return.

Holland has until Dec. 1 to find a team willing to acquire and sign Puljujarvi. Otherwise, he’ll be ineligible for the rest of this NHL season. Sportsnet’s Chris Johnston reported Puljujarvi is comfortable with spending the remainder of the season in Finland.

After clearing waivers earlier this month, the 23-year-old winger requested a trade. He’s currently training in Toronto while Islanders GM Lou Lamoriello attempts to find him a new home.

Ho-Sang is reportedly telling clubs he’s willing to start in the AHL if that’s what they want. The Athletic’s Arthur Staple doubts the former first-round draft pick will fetch much of a return.

Honka is also playing in Finland awaiting a trade. The 23-year-old defenseman struggled to crack the Stars’ blueline and could benefit from a change of scenery.

A restricted free agent, Honka is reportedly keen for an opportunity to establish himself as an NHL regular. The Stars have until Dec. 1 to find a club willing to sign him or he’ll be ineligible for the rest of this NHL campaign.