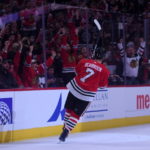 Seabrook thinks he’d be a good player for somebody

Ben Pope of the Chicago Sun-Times: The Chicago Blackhawks have made 34-year old defenseman Brent Seabrook a healthy scratch for their past two games. Some have questioned his age and speed, but he feels he can still play “for somebody.”

“I feel like I’ve still got a lot to offer in this league and still be a good player for somebody.”

Seabrook carries a $6.875 million salary cap hit for four more seasons and no-movement clause. His contract will make it difficult to re-sign some of their young players, and they will have to protect him in the expansion draft.

“I’m just going to try to do my thing out here, skate today with Crow, try to work hard and get back in the lineup when I can, if I can,” Seabrook said.

When asked how Seabrook is handling the scratching, head coach Jeremy Colliton said “communication and being clear.” Seabrook said they haven’t spoken since he was first told on Sunday, there was “no conversation.”

Curtis Pashelka of The Mercury News: The San Jose Sharks players don’t want there to be any coaching changes or changes in personnel.

“Oh yeah, absolutely the answers are in this room. That’s not a question and that’s not a doubt in my mind,” Couture said. “I don’t think it’s a doubt in anyone’s mind. I think a lot of guys in here are obviously frustrated. We’re upset individually how we’re playing, we’re upset as a team. At times tonight you could say it was almost embarrassing out there.”

“It seems like it is something different every night but, no one’s going to feel sorry for us. We’ve got to figure this out and do some soul searching and get back home.”