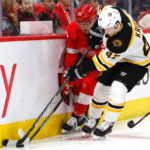 Craig Custance of The Athletic: One agent notes that some of these RFAs signing big extensions early, it may limit the money that would be available for the group of pending UFAs. Some players will still get paid, but others may not.

“I think some guys will be overplaying their hands. It’ll be interesting,” said an Eastern Conference executive. “Guys have to be careful who goes and what they turn down … especially those second tier guys.”

Looking at the top pending UFAs with some notes about their situation.

Taylor Hall – The New Jersey Devils and Hall’s agent will meet in the next couple of weeks. His agent Darren Ferris isn’t saying much.

Roman Josi – The sides are trying to get a deal done. The closer it gets to July 1st the higher the amount may get.

Chris Kreider – Have been no meaningful extension talks and he could be dealt at the trade deadline.

Mikael Granlund – Granlund and the Predators are still feeling each other out. Haven’t been any serious talks.

Torey Krug – Contract talks continue with the Bruins. If he goes to free agency, he’s from Michigan and has a relationship with Red Wings coach Jeff Blashill.

Alex Pietrangelo – Only preliminary talks with the Blues so far. He could be a $9 million defenseman on the open market.

Evgenii Dadonov – Have talked with the Panthers and they may be able to find a reasonable termed deal.

Braden Holtby – Contract talks on hold until after the season.

Erik Haula – No talks with the Hurricanes yet and may end up pricing himself out of town.

Erik Gustafsson – Could become a trade chip for the Blackhawks if they are out of it.

Jake Muzzin – He has been a good fit in Toronto, but there haven’t been any talks.

Tyson Barrie – No talks with the Maple Leafs yet. The Leafs have a lot of pieces to figure out.

Tyler Toffoli – No extension talks with the Kings and could become a trade asset at the deadline.

Jacob Markstrom – There haven’t been serious negotiations but the source saying the Canucks want to re-sign him. A source said there might be a limit to the term they are interested in though.