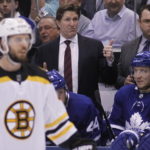 “It was one of those weeks in Toronto,” Friedman said Saturday during the Headlines segment of Hockey Night in Canada, as the Maple Leafs lost for a third time in their past four games. “I didn’t get a sense at all this week (Babcock’s) job was ever in jeopardy.”

“One note I will say is that internally the Leafs don’t mind, at least some in the organization, that the team’s faced some adversity here,” he said. “They believe it will make them stronger. When they looked at their schedule, they knew it would be a tough opening month.”

Top-six options for the Bruins

Joe Haggerty of NBC Sports Boston: The Boston Bruins could use one more legit top-six forward this season.

Taylor Hall – He’s a left winger though. He carries a $6 million cap this year and is a pending UFA. Would be a longshot add for the Bruins given the asking price in a trade and being able to fit his contract in.

Alex Tuch – Has been on the LTIR to start the season. He signed a six-year extension at $4.75 million per. Might cost the Bruins Jake DeBrusk in a deal but might be worth it.

Jason Zucker – Three years left at $5.5 million. Would Danton Heinen, Jakub Zboril and a draft pick be enough for the Wild?

Chris Kreider – A natural left winger, but is a big-bodied forward. He would be a rental player at $4.625 million. It could cost a draft pick and a prospect, something the Bruins have plenty of.

Mike Hoffman – Another left winger. Pending UFA at $5.125 million. May not cost much, but the Panthers may not be sellers.

Josh Ho-Sang – Cost to acquire may not be much but worth a gamble.

Jesse Puljujarvi – It would be a bit of a risk, and cost more than Ho-Sang. It could cost a top-nine forward prospect and a draft pick. Would Zach Senyshyn or Anders Bjork be worth it?

Tyler Toffoli – Last year of his deal at $4.6 million and his stock isn’t high. 27-years old and a move could re-ignite his career.