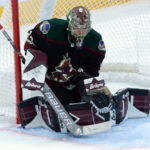 Bruce Garrioch: (the Senators last night traded Jack Rodewald for the rights to Chris Wilkie) “The #Sens can always move a contract as part of any deal to get a forward so, yes, the deal last night offers flexibility with the club at 48 contracts but GM Pierre Dorion can make a one-for-one trade. They’d like another forward but can move one out in a trade as well.”

Can the Oilers add a third-line center?

Kurt Leavins of the Edmonton Journal:  When will the Edmonton Oilers be able to bring in a real third-line center?

Potential options for the Oilers could be Ottawa Senators Jean-Gabriel Pageau or Colorado Avalanche’s Tyson Jost.

Would the Devils look to the Coyotes for a goaltender?

Larry Brooks of the NY Post: The New Jersey Devils goaltending tandem of Cory Schneider and Mackenzie Blackwood have second lowest save percentage.

Would the Arizona Coyotes consider trading goaltender Antti Raanta? The 30-year old has another year left on his deal at $4.25 million. The Coyotes signed Darcy Kuemper to a two-year extension at $4.5 million that kicks in next season.

Rob Rossi of The Athletic: The Pittsburgh Penguins gained some cap flexibility by trading Erik Gudbranson to the Anaheim Ducks. GM Jim Rutherford may now have some flexibility to make a hockey trade later this season.

The cap space doesn’t mean that Casey DeSmith will be recalled to replace Tristan Jarry. Rutherford hasn’t immediately turned to make another trade.

Matt Murray is eligible for a contract extension at any point. He’s making $3.75 million this season. He could be looking for something close to $7.75 million.

Defenseman Marcus Pettersson is going to get a long-term extension according to Rutherford. He’s showing his a top-four defenseman, so maybe something around $4 million could work.

Could the Penguins package Jarry and a forward like Nick Bjugstad, Zach Aston-Reese or Dominik Kahun for another forward with more offense.