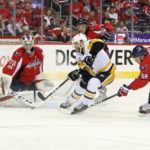 Penguins trade talks fell through, but could they pick up again

Dan Kingerski of Pittsburgh Hockey Now: A source has said that at the end of September/start of October that at least one player was told that he could be involved in a trade – which obviously hasn’t happened yet.

Talks fell through before injuries compiled for forwards Bryan Rust, Nick Bjugstad, Alex Galchenyuk, and Evgeni Malkin. It’s not known if trade talks will pick up again once players get healthy.

Both Rust and Bjugstad have started practicing and could return this weekend.

A source said that Casey DeSmith‘s demotion to the AHL wasn’t supposed to be a long-term thing, but could be given the cap and how Tristan Jarry played.

TSN: Bob McKenzie notes that New York Rangers prospect Vitali Kravtsov European out close opens up . He’s playing in Hartford and has only recorded one assist in five games.

“Now the Rangers don’t want him to go back, they want him to stay and play with less time and space and get used to smaller ice, but he does have that option and this would be the only year he has that option and in the future he would have to stay in the minors.”

TSN: There doesn’t appear to be any hurry for the Washington Capitals to extend pending free agents Braden Holtby and Nicklas Backstrom. There have been talks between the sides, but it appears they will let the season play out a bit according to Pierre LeBrun, possibly for the entire season.

LeBrun notes the salary cap is one thing, as well are they still a true Stanley Cup contender.

“All of that will play into these decisions. The players know it, everyone is on the same page, but absolutely fascinating especially Holtby’s case. Ilya Samsonov is pushing him for starts and that’s another factor in a long-term decision in goal for Washington.”