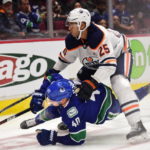 Elliotte Friedman of Sportsnet: The Ottawa Senators are trying to add a forward after the injuries to Colin White and Artem Anisimov.

There is going to be lots of Mike Babcock talk with the growing pressure in Toronto. He already takes a lot of heat.

Before going on waivers, the Detroit Red Wings were trying to trade defenseman Jonathan Ericsson.

The Minnesota Wild have now won two in a row. Teams were calling Wild GM Bill Guerin but he wasn’t going to make a move for a quick fix.

“I’m getting calls,” he said last weekend, “but I’m not going to do anything just for the sake of it, or because things are emotional. Still evaluating.”

The Edmonton Oilers are hoping to talk to defenseman Darnell Nurse soon about a contract extension. He is two years away from being an unrestricted free agent.

Washington Capitals GM Brian MacLellan on if being a pending UFA could be affecting goaltender Braden Holtby.

“I don’t think so,” he replied. “We spoke at the beginning of the year, so we could communicate about contract, about team situation, about cap situation. It might be affecting him, but my interpretation is it is not. He goes through some periods where he gets a little off. He’s trying to improve his game and he’s trying certain things, maybe they don’t work as quick as possible. He always seems to be able to recover and we anticipate him playing at a high level soon.”

TSN: Pierre LeBrun says that despite Troy Stecher being bumped down to the third pairing behind Tyler Myers and Chris Tanev, the Vancouver Canucks are happy to have the depth on their blue line. It’s something they’ve lacked in the past.

“So right now that’s the plan is to keep a guy like Stecher for that reason. Because he’s a good player. They have depth, and they know it’s a long year. Now, it is a contract year for Troy Stecher, so at some point, I’m sure there are teams that are going to circle around the situation and reach out to the Canucks. But right now, the Canucks are happy to have him on their team.”