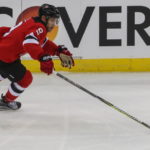 Pierre LeBrun of The Athletic: Though the February 24th NHL trade deadline line months away, taking an early look at what players might be available.

Taylor Hall – New Jersey Devils – There haven’t been any recent contract talks between the Devils and Hall’s camp. If the Devils don’t turn their season around and if a deal can’t be worked out before the deadline, he could be moved. A trade and then an extension with the acquiring team is possible, but not easy to do.

Ilya Kovalchuk – Los Angeles Kings – Kovalchuk will get his second bonus of the year on December 15th. His salary this season is $700,000, $4.25 million next year with a $6.25 million cap hit. The Kings may need to retain money to get the cap number down. Could the Boston Bruins and San Jose Sharks be interested again?

Erik Gudbranson – Pittsburgh Penguins – Don’t see teams interested in the Penguins other defenseman that is available – Jack Johnson at three of $3.25 million. Gudbranson has a year left at $4 million. Would the Anaheim Ducks be interested?

Vladislav Namestnikov – Ottawa Senators – Yes the Senators just acquired him, but he’s a pending UFA and could be flipped. Namestnikov’s agent said it’s too early to tell what will happen.

Marco Scandella – Buffalo Sabres – Rasmus Ristolainen may be happy in Buffalo now, so the Sabres could look to move the pending UFA. He carries a $4 million cap hit.

Chris Kreider – New York Rangers – The sides held brief contract talks back in June, but haven’t had any since. The Rangers may wait until the New Year after seeing how the start of their season goes, Has an 11 team no-trade. He’d like to stay.

Kyle Turris – Nashville Predators – Hasn’t been a good fit for either side since being acquired and he’s now in their bottom six. The Preds have been trying to move him since the offseason with no takers on his $6 million per for another four years after this season. Would the Penguins be interested, though there would be cap issues?