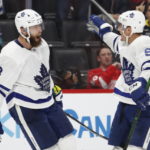 Some good news coming for the Jets?

TSN: Darren Dreger said that there is a “growing sense of optimism” that Winnipeg Jets defenseman Dustin Byfuglien will return to the team at some point.

“Now, clearly there’s nothing official. There’s no guarantee. There’s no timeline on when Byfuglien may return and you’re not going to get the Winnipeg Jets to confirm nor deny. It’s just a sense that he’s more likely to return than not, which is saying something, considering all the speculation over the last few weeks. Despite the concerns over the time missed, he would be a welcomed addition to a very inexperienced blueline. But I’m thinking from a Jets perspective, time will tell.”

TSN: Bob McKenzie on Nashville Predators forward Kyle Turris who is making $6 million a season and playing on their fourth line.

“Well Kyle Turris is a situation worth monitoring with the Nashville Predators. Now, I don’t think it’s any secret in the summer general manager David Poile was trying to move Turris and his contract which has another five years to go at $6 million per year. Now, the last game out he played under 10 minutes. He’s currently centring the fourth line. It’s not an optimal situation for him. It’s not one for the Nashville Predators, either.”

“Jake Muzzin, their best defender early this season, there have been no contract talks at all. Not this summer. Not early in the season between his camp and the Toronto Maple Leafs. Understandable the Leafs had other priorities named Marner to take care of. Here’s the thing. Because Tyson Barrie and Codi Ceci are newcomers, I think the Leafs’ front office wants to take a little time and look at how everyone fits on this blueline.  They can’t sign all three. They may not even be able to sign two. Prioritize the guy you are going to go after, perhaps in the new year, and go from there.”

Senators offer use of arena, other facilities to Ontario government amid pandemic
The NHL’s coronavirus pause: How the playoffs could work, new positive tests and more
Ones That Got Away: The Winnipeg Jets’ Dave Babych
Ottawa Senators announce temporary layoffs, salary reductions due to COVID-19
Timmins settling into the pros after long journey