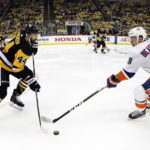 Nolan Patrick could be close to returning, which could mean that one of Connor Bunnaman or Carsen Twarynski will be sent back to the AHL.

If either Bunnaman or Twarynski is sent down, it could give the Flyers even more cap space to sign Chris Stewart. Stewart is still with the team on a PTO.

Dave Isaac of the Philadelphia Inquirer: The Philadelphia Flyers haven’t been able to sign Chris Stewart until now. He’s been traveling with the team – to Europe and out West. He doesn’t have a salary yet but he’s been getting a daily per diem from the team and they are covering his hotel room.

“This is the best shape he’s been in in years, at least that I’ve seen, and he obviously brings the physical element,” Fletcher said at the end of training camp. “He brings the elements of being a pretty quality power forward. Now the question is can he still do it after missing most of last year? Time will tell, but he continues to get better and he deserves to be here.”

Less pressure for the Penguins to add a forward, but they still have a crowded blue line

Pierre LeBrun of The Athletic: The Pittsburgh Penguins scored 14 goals over the weekend without four of their top nine forwards. Their callups have at least filled the hole for now which may take away some of the pressure for GM Jim Rutherford to go out and trade for forward help immediately.

The Penguins are still caring nine defensemen, and there has been more confirmation that they are trying to move one.

The Winnipeg Jets, Anaheim Ducks, Arizona Coyotes, and the New Jersey Devils could be looking for help on the blue line.

Would the Ducks be interested in the grit Erik Gudbranson brings?

The Devils may not be looking for blue line help now, but that may change if their slide continues.

The NHL’s coronavirus pause: How the playoffs could work, new positive tests and more
Oilers’ Colby Cave recovering after emergency brain surgery
NHL players, staff grapple with possible playoff scenarios amid coronavirus-related stoppage
Which NHLer scored the best goal of the season?
Looking Back: Senators Get Zaitsev and Brown