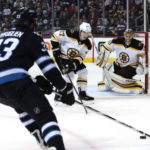 No offseason work for Byfuglien

Neal McHale: Bob McKenzie on Winnipeg Jets defenseman Dustin Byfuglien: “He reportedly did not skate or train all summer.”

Joe Haggerty of NBC Sports: (mailbag) The Boston Bruins will try Karson Kuhlman and Brett Ritchie on the right side on their second line. They could eventually look to trade for someone like they did last year when they acquired Marcus Johansson.

The Bruins could ride out the season and determine that they like Charlie McAvoy, Grzelcyk and Vaakanainen going forward on the left side and consider trading Krug as oppose to losing for nothing. Another option could be adding a prospect or two to a Krug deal and bring a top-six winger.

Bruce Garrioch of the Ottawa Sun: The Ottawa Senators acquired Vladislav Namestnikov earlier this week, a deal they thought would have happened earlier.

“We have a plan and we want to make sure we stick to the plan,” Dorion said Tuesday. “The reason we made this trade, and we personally thought it was going to happen before the season and the two losses haven’t affected anything we’ve done here, because our long-term vision is to make sure our younger players develop properly in Belleville.”

Namestnikov is a pending UFA and should be motivated for this season.

New York Rangers GM Jeff Gorton said that the moving of Namestnikov’s salary cap hit (the Rangers retained $750,000 of his $4 million cap hit) gives them the potential to make another move later on this season.