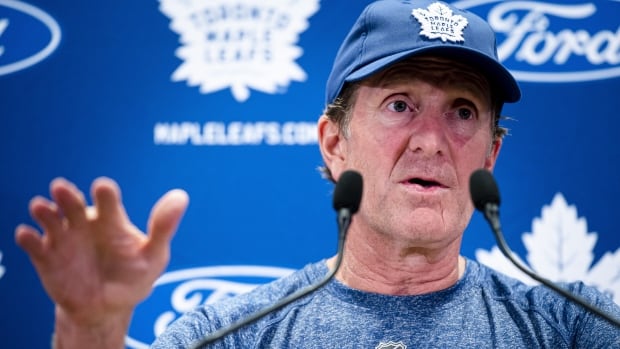 That part shouldn’t come as a surprise — teams usually meet before hitting the ice to break down video, go over special teams or talk about an upcoming opponent.

This particular conversation, however, had a different feel following an embarrassing 7-3 home loss to the Tampa Bay Lightning roughly 12 hours earlier where a lot went wrong, and not much went right.

“It’s just like a family discussion. It’s just honest,” Babcock said when asked about the tone of the meeting. “The reality is we weren’t good enough. There’s nowhere to hide here. Like any good family, that’s what it’s like.

“You keep each other accountable.”

Having all of a sudden dropped three straight home games, including the last two in regulation, Toronto (2-2-1) will look to get back on track Saturday in Detroit against the Red Wings (3-1-0).

But no matter the opponent, the Leafs will need to be better across the board following an effort that left much to be desired and had some fans streaming to the exits at Scotiabank Arena with 13 minutes remaining in the third period.

“That’s unacceptable. We have to fix that.”

Toronto captain John Tavares, whose first goal of the season was one of Thursday’s lone positives, called the loss that saw his team give up two power-goals on three chances and surrender 11 points to Tampa’s top line of Steven Stamkos, Nikita Kucherov and Brayden Point a “learning experience.”

“You want to continue to have a pulse on things,” Tavares said of his approach to the first mini crisis as the Leafs’ outright locker-room leader. “We want to nip a game like [Thursday] in the bud and move forward. We haven’t gotten the results we’ve wanted over the last three games.

“It’s not our standard or our expectation.”

‘Bound to be some duds,’ says Morgan Rielly

Toronto defenceman Morgan Rielly, who was victimized on Tampa’s third goal in a wild first period that saw the visitors come out with a 4-3 lead, said there are bound to be some duds in an 82-game schedule.

“It’s about how you respond to that, how you react, and how you adjust and limit those [performances],” he said. “You have to deal with the fact mistakes are going to happen, things aren’t always going to go your way.”

The Leafs blew a 4-1 lead before losing 6-5 in a shootout to the Montreal Canadiens last Saturday, but felt good about their game in Monday’s 3-2 loss to the Stanley Cup champion St. Louis Blues.

Those vibes didn’t continue against last season’s Presidents’ Trophy winners, who came in on a two-game slide of their own.

“Any time you play like we did, the first thing is the coach didn’t do his job,” Babcock said. “We’re up 2-1 with eight minutes left in the first period, but we didn’t stay playing, we got rattled, we didn’t keep digging in.”

Can’t get by on talent alone

“We can’t skill our way through every single game,” Leafs blue-liner Cody Ceci added. “There’s other teams that are just as skilled as us. If they work harder than us, they’re going to win.

Toronto winger Kasperi Kapanen, who has struggled at times to find chemistry on a line with Tavares and Mitch Marner in place of the injured Zach Hyman, said it’s important to push forward.

“We just weren’t at our best,” he said. “A bad game that we’ve got to learn from and at the same time forget.”

The Leafs didn’t suffer a three-game drought until Feb. 21 last season, and know their attention to detail — especially in the defensive zone — needs to be a lot better after getting badly exposed against Tampa.

“There were definitely points where they outworked us, and that’s unacceptable,” Rielly said. “And then there were points where we just didn’t execute and were working hard — we wanted it, but we just couldn’t execute.

“That’s not a game you look back at fondly.”