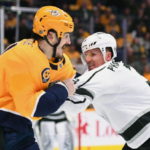 TSN: Free agent Brian Boyle could be signed to a contract soon according to Bob McKenzie as he’s getting significant interest. There are still some veteran out there looking for a landing spot.

“Another veteran who is technically unemployed is 34-year-old centre Brian Boyle. How long that remains the case remains to be seen,” McKenzie said on Insider Trading. “There is significant interest in Boyle; he is talking to a number of teams. But one of those teams either needs to clear some cap space or clear a roster spot in order to sign him. But I would anticipate that there is a strong expectation that Boyle will be back in the NHL sooner rather than later.

“Lots of other veteran guys though on the outside looking in as far as jobs. You’ve got Dion Phaneuf, Andrew MacDonald and Griffin Reinhart on the blueline. You’ve got Jason Pominville, Tomas Vanek and Devonte Smith-Pelley up front amongst those who are NHL veterans with no jobs to be had right now.”

Elliotte Friedman of Sportsnet: The offseason momentum for the Nashville Predators and pending free agent Roman Josi has stopped. It’s a surprise that an extension hasn’t been done.

St. Louis Blues defenseman Alex Pietrangelo after their game on Monday on his contract talks.

“We’ll just see how things go,” the pending unrestricted free agent said. “I don’t want to talk about it. I just worry about playing hockey — that’s my job.”

Pietrangelo’s agents met with GM Doug Armstrong on Monday. The Blues may be wanting to use Oliver Ekman-Larsson‘s eight-year, $66 million as a baseline.

A few NHL team executives will be going to watch 25-year old Russian winger Alexander Barabanov. He had 46 points in 58 games last year, but only three through 12 games this year.

Detroit Red Wings pending UFA defensemen – Trevor Daley, Jonathan Ericsson, Mike Green – could be trade targets for someone is looking for a defenseman.

The Florida Panthers will try to move pending UFA defenseman Mark Pysyk. The New Jersey Devils and Vancouver Canucks looked at him in the offseason. He carries a $2.73 million cap hit but $3.5 million salary.

Teams are leery of Josh Ho-Sang but they are looking at him. A deal may be harder to make if the New York Islanders want to attach a game played condition on a trade.