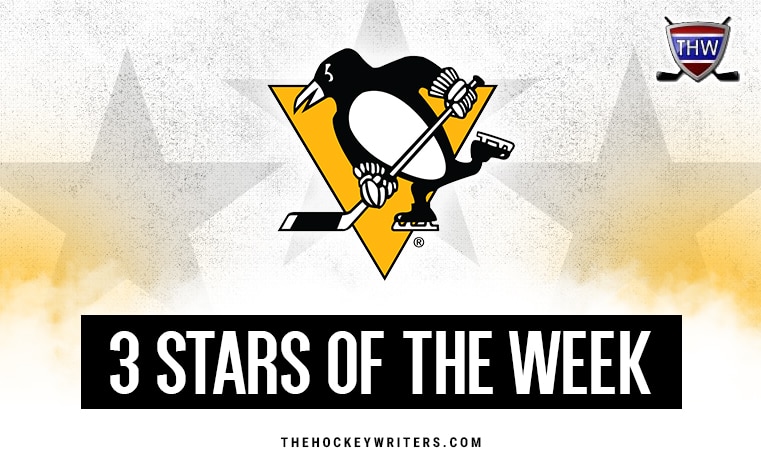 Week 1 of the 2019-20 season is complete and the Pittsburgh Penguins had a roller-coaster week. With all three games at home, the Penguins fell flat against the Buffalo Sabres and Winnipeg Jets but looked really good against the Columbus Blue Jackets. The biggest takeaway of Week 1 was the injuries. Centers Evgeni Malkin and Nick Bjugstad were injured against the Blue Jackets and placed on injured reserve, and forward Patric Hornqvist was injured against the Jets. Each week we will take a look at the three stars of the week for the Penguins and highlight the club’s best-performing players.

Even though he struggled Tuesday night against the Jets, goaltender Matt Murray earned himself the third star of the week. In the season opener, he had 38 saves on 41 shots and kept the Penguins in that game. He was one of the few bright spots, making multiple breakaway saves and coming up big when the defense let him down.

He followed up his 38-save performance with 28 saves on 30 shots against the Blue Jackets. In a game where the Penguins won 7-2, he still made some timely saves to keep CBJ from gaining momentum. His save on a defensive breakdown while the Blue Jackets were on the power play was a thing of beauty with the game tied at 0-0. It was also good to see Murray start three games in a row, a sign that he is fully healthy to start the season. Even with a rough third game, Murray was the best player against Buffalo and earned himself the third star of the week.

The second star of the week goes to Jared McCann. Unsure of which line he was going to play on to start the season, the injuries to Malkin and Bjugstad have him firmly as the second-line center. Against Columbus, he tied a career-high three points, with two of those being goals that put the game out of reach of the Blue Jackets.

Having to fill Malkin’s shoes is never easy but he seamlessly filled in for him. A tough night Tuesday in the faceoff department but his position player was superb against Columbus and Winnipeg. McCann will need to step up big for the Penguins the next month or so while Malkin and Bjugstad recover from their lower-body injuries.

The first star of the week is the captain, Sidney Crosby. On opening night, he earned a secondary assist on the team’s only goal on the power play – a nifty little pass to Kris Letang set up Evgeni Malkin. Crosby added two more assists against the Blue Jackets, with his second setting up Hornqvist for an easy tap-in goal. A clever stick handle and pass was indefensible of the defense and Crosby continues to show why he is still one of the best in the league. Winning 11 of 19 faceoffs was also crucial to the Penguins success.

Crosby starred in the final game of the week with a goal just 32 seconds in off a nice pass from Jake Guentzel. Even in a loss, Crosby was once again dominant in the faceoff circle and was visibly the best player on the ice for the Penguins. His speed and crisp passing was one of the few bright spots on Tuesday night. He ate up minutes (22:05) with the Penguins dressing 11 forwards and elevated everyone’s play around him. A fantastic start to the season for Crosby and the Penguins will need him to continue these kinds of performances with all their injuries at the forward position.

Each week, a point system will be in place and will be maintained on a weekly basis. Third star gets one point, the second star gets two, and the first star gets three. Agree or disagree with the stars of the week? Let me know in the comments below or on Twitter at @joshkaradeema.