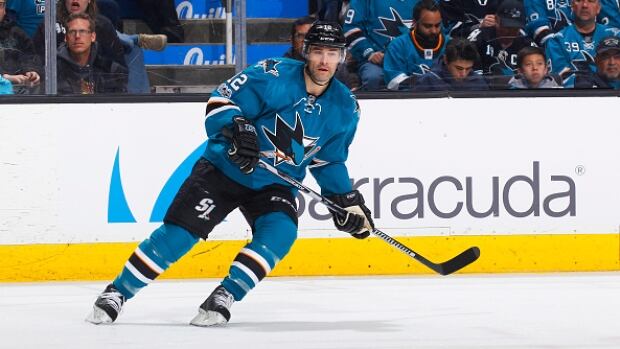 General manager Doug Wilson announced Tuesday that the Sharks’ all-time leader in games, goals and points is returning to his original team with a one-year, $700,000 US contract after spending the past two seasons in Toronto.

The Sharks failed to record a point in the first three games for the first time since 1993-94 and only scored three goals in the process. That led to the move to add a veteran forward with a history of production in the NHL.

HE’S BACK IN TEAL! <br><br>Welcome back, Patrick Marleau! <a href=”https://t.co/jyFczqWrJy”>pic.twitter.com/jyFczqWrJy</a>

The 39-year-old Marleau left San Jose two summers ago to sign a three-year, $18.75 million contract in Toronto after the Sharks were unwilling to offer a deal longer than two years. Marleau had 43 goals and 41 assists in two seasons with the Maple Leafs before being traded to Carolina in June in a salary cap move.

The Hurricanes then bought Marleau out, making him a free agent. He worked out with his former Sharks teammates in San Jose over the summer but the team opted to go young instead of bringing Marleau back.

That all changed following the rough start for San Jose and now Marleau is back in teal.

Marleau originally joined the Sharks as the No. 2 overall pick in 1997 and holds franchise records in goals (508), points (1,082) and games played (1,493). He helped the team reach the conference final four times in his career and the Stanley Cup Final in 2016, but never won it all.

Marleau came under criticism at times for playoff disappointments but remained a fan favourite and was warmly welcomed back the past two years as a visitor with Toronto. His family also moved back to the Bay Area, leading to Marleau’s interest in returning.

Marleau has always been known as one of the fastest skaters in the NHL but appeared to have lost a step last year when his 16 goals were the fewest he had scored since having 13 as a rookie in 1997-98.

“He’s still got a lot of game in him,” former Toronto teammate Auston Matthews said last month. “He’s in unbelievable shape. Every single year, both years he was in Toronto, he comes in flying. It’s like he’s not even breathing.”

A fixture in San Jose’s top six forwards and on the No. 1 power play unit during his first stint there, Marleau figures to be more of a role player.

He will reunite with longtime running mate Joe Thornton, who also turned 40 recently. The two were the faces of the franchise during more than a decade together after Thornton arrived during the 2005-06 season and made the Sharks a perennial contender.

Marleau has 551 goals and 615 assists in 1,657 career games, including 788 in a row since he last missed a contest on April 7, 2009. Marleau ranks fifth all-time in games played, trailing record-holder Gordie Howe by 110 for the most in NHL history. Marleau could eclipse that mark if he plays past this upcoming season.