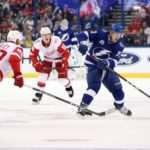 The Tampa Bay Lightning have traded restricted free agent forward Adam Erne to the Detroit Red Wings for a 2020 4th round pick.

The 24-year old Erne was drafted 33rd overall in the 2nd round of the 2013 draft by Lightning.

The Lightning now have nine draft picks in the 2020 draft. They’ll have two picks in the 1st, 4th and 6th. They don’t have their 5th round pick.

Joe Smith: “Erne was an RFA who didn’t file for arbitration, with both sides working on deal. Not the ending that was expected. But opens another spot in bottom six.”

Max Bultman: “Erne’s still an RFA, so this trade still leaves a bit of business for Yzerman and Co. to accomplish over the next few weeks before training camp. Big winger scored 20 points in 65 games last year (at about 10 and a half mins per game) as a 23 year old. He turned 24 in late April.”

Mike Kelly: “Put him on a line with Tyler Bertuzzi immediately and you’ve got the best nickname for a line in the league.”

Vegas dominates St. Louis, one win from West’s top seed
Canucks Unsung Heroes Were Key in Game 2
The cases for, against permanently expanding the NHL playoffs
Coyotes Push Preds to the Brink of Elimination
Canadiens upset Penguins to advance to first round of NHL playoffs