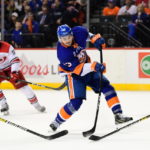 Extension talks to start for some pending restricted free agents

Pierre LeBrun of The Athletic: From understanding, the New York Islanders and the agent for Mathew Barzal, J.P. Barry, have already established that they’d like to have contract extension talks this fall. Barzal’s numbers so far have him between Auston Matthews and Mitch Marner. That could be a starting point for his camp, with the Islanders may be looking at Mikko Rantanen‘s new deal.

Believe that the Columbus Blue Jackets have let Pierre-Luc Dubois‘ camp know they’d like to have extension talks. The Blue Jackets could toss a big number to agent Pat Brisson to get talks going.

Talks between the Tampa Bay Lightning and Mikhail Sergachev could go down to the wire. Agent Mark Gandler may let the season play out and start talks in the offseason.

Victor Mete and the Montreal Canadiens have had preliminary talks, but Mete’s side may not be in any hurry.

There is no indication that the St. Louis Blues and Vince Dunn have spoken about an extension, and the Blues may not be in any rush.

“We are not a group that looks to jump the process,” said Blues GM Doug Armstrong said via text message Thursday. “Our group is built around vets so no need to put pressure on young players.”

The Boston Bruins haven’t spoken with Jake DeBrusk’s camp yet. The priority for the Bruins is likely defenseman Torey Krug.