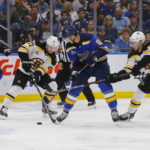 The Bruins, Krug and Coyle have started contract extension talks

Joe Haggerty of NBC Sports:  After a not having contract extension talks with the Boston Bruins this past offseason, defenseman Torey Krug seems little relieved that negotiations have started.

“It’s exciting. Now that we’re in the regular season I don’t want to talk too much about it just out of respect for my teammates and the process,” said Krug, who posted 53 points in just 64 games last season and enters a season totally healthy for the first time in a long time. “But it’s obviously exciting when you’re talking about where you could be for the future while taking care of the present obviously. That’s the most important thing. But it’s an exciting time and hopefully things work out.”

Bruins GM Don Sweeny confirmed that the sides are talking. Sweeney added that they are also talking with Charlie Coyle‘s camp.

“The are all ongoing. As I’ve been previously saying that you will not hear through us where those deals are at, and that’s really out of respect for every deal that you negotiate. I understand it makes your guys’ job that much harder, and you do a hell of a job predicting where those are all supposed to go; Joe , I read yours this morning,” said Don Sweeney. “Those influences are not brought in to our discussions. We have discussions that need to take place, and the other side will hopefully respect that as well.”

Jared Spurgeon‘s seven-year, $53 million deal with the Minnesota Wild could be one comparable.

“To me, I’m not really worried about it at all,” Coyle said. “It’s nice to have that communication right now and I’ll talk with my agents and they’ll talk with Don just to keep that open line of communication is good. But, it’s not something where ‘we gotta get this done! We gotta get this done!’ just so it’s off my mind. I’m really focused on this year. I’m under contract this year, so I feel like I can just play and do what I need to do to help this team win and be the best player I can be. That stuff will work itself out if I keep focusing on the task at hand I think. So yeah, I’m not too worried about it. That will play out and like I said, we have that open line of communication and that’s good going forward.”