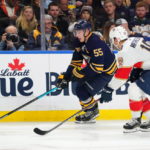 Players who could be in the trade rumors this season

Mike Johnston of Sportsnet: Looking at some players who could have their names in trade rumors this season.

Rasmus Ristolainen – Buffalo Sabres – Has had his name in the rumor mill most of the offseason and he won’t say if he’s asked for a trade. The Sabres have nine pending UFAs, so if they struggle early one, Ristolainen may not be alone in getting moved.

Brayden Schenn – St. Louis Blues – The Blues also have to re-sign Alex Pietrangelo, so it may not be easy to do both. Losing Schenn to free agency for nothing is an option, or they could look to get some return for him.

Kyle Turris – Nashville Predators – Four years left at $6 million may not be easy to move without retaining salary or including another asset. Mikael Granlund or Craig Smith may be more likely to be moved.

Mike Hoffman – Florida Panthers – If the Panthers are not in playoff contention, he could be a nice rental acquisition for someone. He carries a modified no-trade clause.

Jack Johnson – Pittsburgh Penguins – Won’t be easy to move his four remaining years at $3.25 million. Teammates Erik Gudbranson and Nick Bjugstad could also be moved to clear some cap space.

Jason Zucker – Minnesota Wild – May not be safe even with new GM Bill Guerin. The Wild are looking for help down the middle. He has four years left at $5.5 million per season.

Chris Kreider – New York Rangers – The Rangers could continue the rebuild. If they don’t look like contenders early in the season, they could move the pending UFA.