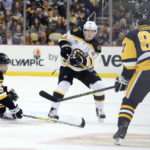 That group of seven carries a cap hit this season at just under $18 million but that could climb to $31 million next season if all are brought back.

Penguins GM Jim Rutherford has said that he’s “probably not” going to negotiate in-season with Schultz and Murray.

“With the amount of contracts that are expiring, I think we have to let it play out to see how many pieces we can fit into that puzzle,” Rutherford said.

Petterson will be signed to long-term deal.

“He will be (signed to a long-term extension),” Rutherford said of Pettersson. “That’s going to happen.”

No contract talks for Krug yet

Joe Haggerty of NBC Sports: With defenseman Charlie McAvoy and Brandon Carlo now re-signed, the Boston Bruins now have a better idea on where they sit cap wise and can have a little easier time forecasting their numbers to deal with some of their pending free agents.

As of earlier this week, there had been no contract extension talks with pending free agent defenseman Torey Krug.

“I’ve made no secret that I want to be part of this room, part of this organization and part of this city . So I’m hoping sooner than later it gets dealt with so I can clear my mind and focus on hockey. But that being said, it’s never a distraction. I’ve done it year after in my career aside from the four-year deal.”

Krug is fourth in defenseman scoring over the past three seasons with 163 points.

There is a good chance that he’s even willing to take a bit of hometown discount.

A comparable could be the deal that the Minnesota Wild just signed Jared Spurgeon too – seven years and $53.025 million.